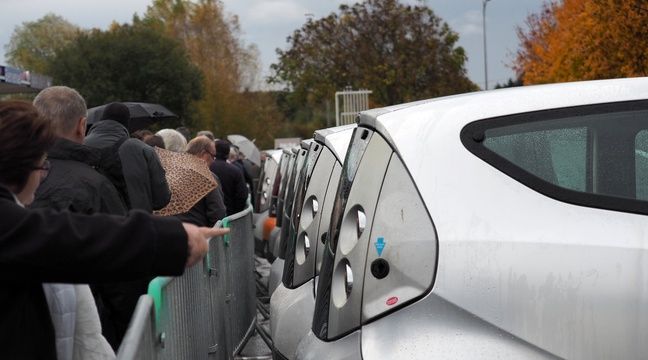 Despite rain and wind, hundreds of buyers were stalking a supermarket car park in Romorantin, the heart of Sologne, on Saturday morning trying to get an electric car from the Paris Autolib's car sharing service that ended in August.

The first customer, Max Minerbe, 36, arrived from Tours, near the city, at 04:00. The others slept in the parking lot. "We did everything we could to warn people away," says Charlotte Caravec, 31, a seller of the same garage that has been "buried" during a call after 48 hours. "We were afraid of Mass Effect," he adds to the civilian benevolent eyes to prevent overflow. Wisely lined behind the suns, under their umbrella, buyers pull all the fuel savings they are going to make with a car sold for 3,700 euros.

Sales began at 10am and 200 people wait. Later the late morning 50 cars were sold. The organizers have provided 50 more but did not send them to their buyers who pay the advertised price without being seen.

"They would pay zero euros," says Andre, came from Yvelines to look for a car to his wife. He has to come back to him, but he is sure of himself and says, "Goodbye to gasoline." Behind him Jahan Serra and his friend Muloud came from Pennes-Mirabeau near Marseille. They also want to spend less of their daily trips. The first buyer, André Rochais, 65, would like to make another car. Most potential buyers are old, already own vehicles and intend to use a new purchase only for local journeys.

Everyone is interested in low running costs: no gasoline, electricity available to everyone, unlike other electric cars that need to be connected to specialty stores, free registration certificate and reduced insurance 1 tax cv.

Only unknown: after-sales service. The blue network would have to offer it because the Bolloré group, the creator of the Autolib system, has set it up.

Many issues are also related to the condition of the car. The aluminum prototype designed by Pininfarina. After 2011, after an Autolib launch year, they spent an average of 100,000 kilometers, the sellers assured.

The body is changing. Bomber, scratches and scratches testify to Paris driving. Indoors where subscribers, 150,000 tallest, sometimes missed sandwiches or syringes, were cleaned. The seats in gray faux leather are clean.

"He's not nickel, but we've worked on it," says David Hagège, who created the site "adieulessence.com" and arranges sales. "We went to see Bollore and told them not to" throw them ", he says and demands an" ecological and economic "approach.

After 10 minutes of sales, the number of buyers rose by four, and the cars sold were already marked with their wiper blades. Everything has left in an hour. Sellers are listening very much, especially as they raise a $ 2,000 state prize, which is available for purchasing a electric car.

A total of 3500 autolibes were returned from Paris to Romorantin in the former Matra factory site when the service was dismantled in the Paris area. Since this "flash shop" is the best marketing technique, other similar cars are sold by Charlotte Caravec exclusively in his garage, but they are more expensive: 4 500 – 4 700 euros.