There was no agreement with Tsipra, but I intend to agree 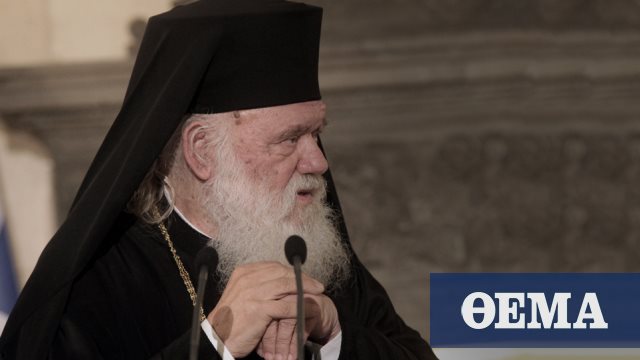 To clarify what happens after the meeting was held on Tuesday at the Maximos Mansion with Alexis Tsipras, Archbishop Ieronymos tried on Wednesday afternoon.

As he said in his statements after the Synod Synod, "there is a different difference: the second agreement and the other one to agree."

"What happened yesterday? It was announced yesterday that we have a good intention to find solutions to nearly a century of problems," said Ieronymos, speaking of the good atmosphere of the state.

The Archbishop paid particular attention to the clergy question that has arisen following a joint statement stating that they are no longer officers, saying, "I repeat what we do, how the Fund comes from, are priests and without consent to the general interest not only of the priests, We do not make it richer, but we get in order. "

At the same time, he repeated the "fairy tale" of the great wealth, again using the charcoal pattern: "Wealth as a carbon that has fallen, Wealth does not exist, We do nothing unless we come to the point that the priests want, Everyone is seeking a peaceful course for us all and for our people . "

At the same wavelength, the announcement of the Holy Synod

The notice reads as follows:

Archbishop of Athens and Archbishop Ieronymos of Greece and Prime Minister Alexis Tsipras after the meeting and the Holy Synod's announced publication:

1) No agreement has been sought or signed but no reciprocal "intention to the Church and the State to reach a historic agreement that would be a legal solution" is expressed.

2) On this subject and on relevant proposals, such as the competent body, the hierarchy of the Greek Church has to be convened to make final decisions.

3) In any case, the purpose of the final agreement is the common interest of the people and of the Church, because our basic prerequisite is to protect and fully protect the rights of our clergy.

4) We welcome the fact that the Greek Prime Minister has now admitted that:
a) "the Church's role and the historical role in the birth and formation of the Greek state and peoples"
(b) "the aim is to strengthen the Greek Church's sovereignty over the Greek State"
(c) "It is acknowledged that the Greek State took over the salary of a general in exchange for the church property he had acquired"
(d) "the destruction of historical symbols, the cross of the Greek flag and the national symbols are fun cartoon tactics" and
e) "the existence of faith in Greece is a fact that can not be outdated".

5) In this context, we expect the whole political world to make a good contribution to mutual understanding and respect for our traditions so that we can work together for the benefit of the Greek people.

6) We hope this spirit is in the upcoming revision of the Constitution.

Of the Permanent Holy Synod

Rare photo: Tolis Voskopoulos with Zoe Laskar in 1971 during their great love ZOE

New reality from Monday: open shops and text messages to 13033… with countdown – NewsIT

Chalastra: They asked the students to bring blankets