I want to personally solve the march if it is hate 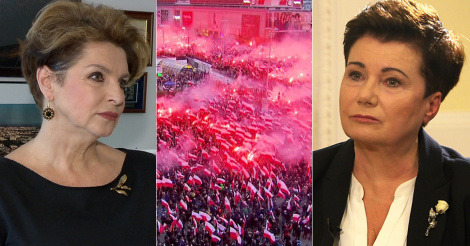 The city authorities are preparing for November 11th. The state ceremonies and public gatherings are monitored by the crisis management center. When the City Hall informs that if the march of the national environments is accompanied by hatred or revelation, the manifestation will be solved.

– I would like to warn loyally that if there is sense of hatred (…) if there is tension, to the same extent as in the previous year, I will solve this phenomenon unpleasant. And I will sign this decision myself, not Mrs Gawor. I stay, especially on November 11, I sit in the security center and take it for my own sake, because I'm not wrong at that time, "said President Hanna Gronkiewicz-Waltz in a debate on the Onet.pl portal.

The President referred to the march of national environments. It is not the only assembly planned on the day the Polish centrist returns its independence. Workers in the city hall are looking at the spot on site. – These are a number of people with the power of the president to carry out, inter alia, dismantling the assembly. It will be with the president and many other people at the headquarters, from which information is collected from representatives of the street office. We also use television broadcasts and follow-ups – said Ewa Gawor, Director of the Security and Crisis Management Agency.

"The lawyer is also with me, and the decision to end the march is difficult, but it may also be necessary – he stressed, adding that he asked the police and the municipal police to send officials who would attend the meetings of the workers who participated in the meetings. Infrastructure components are tested on routes such as concrete tanks and cartridges that can be used for offensive or malicious behavior. "Following this request, the police chief handled us," said Gawor.

When can you solve the march?

As recalled by the BBiZK, a march may be dissolved if participants break the law regulating the right to public order or criminal law. – There is a need to analyze the possible decision to abolish the composition, whether there are legal grounds and whether such a violation of law is where we can "manually raise" constitutional freedoms. We must remember that everyone has the right to participate in the audience. This is ensured in the Constitution. We must have a strong argument for making such a decision – Gawor said.

The reason for solving such an assembly may be song singers, banned banners, and garment elements or inappropriate behavior. – For example, throw stones or road signs. We considered this a few years ago. Another example is a threat to life or health when an anti-manifestation attempts to block the path of the march in a way that violates criminal regulations – says BBiZK's leader.

The chairperson is responsible for the order

Its chairman is a person who is obliged to hold a meeting so that it is not unlawful. As Gawor announced, City Hall employees ask such people for a continuous connection during the march. – It may also be that the chairman asks us for something or from the police. He can confess that he has people he does not want, which disturbs the order – he added.

The head of the Security Office stated in a TVN24 interview that if officials find something disturbing, they will first inform the chairman of the meeting. – He tells us what is illegal and what kind of behavior we expect – he explained. If this does not come into force, the assembly will be settled. – Our employees provide data twice. They ask for breakdown. What will happen next? I do not know. We only report our decision and its floods. Other functions are already under the police and order of which he is responsible – Gawor points out.

In 2017, the nationalists' guinea pigs on November 11 appeared bells and controversial posters. The police arrested 45 people who joined the alliance of citizens of the Republic of Lithuania who organized an anti-demonstration and prevented the march of nationalists.

Entrepreneurs’ health insurance premiums have risen enormously. How much more for flat-rate taxation, in general terms: 1.8.2021

Get lost in the first game; The cute cat game falls late

Email scandal. “You have to work with foreign media correspondents”

“40 vs. 20”: Robert Kochanek explains the past: “I used to have IMPORTANT horns that had to go sideways into the door frame”