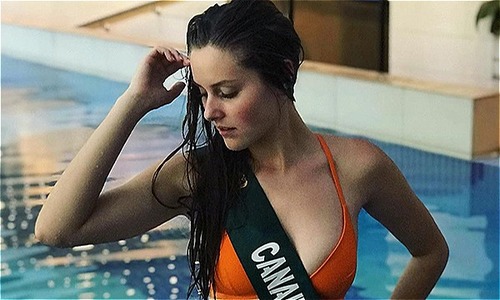 Jaime VandenBerg withdrew from Miss Earth in two weeks and revealed the reason for the sexual harassment sponsor.

Nearly a week after Miss Earth 2018 ended with Vietnamese representative Phuong Khanh crown, Canadian beauty Jaime VandenBerg urgently shared a bad experience when competing in the Philippines. Jaime accused the sponsor of grabbing him and having sex for two weeks. This made Miss Canada afraid of "completely lost faith" to the organizers of the competition because they did not protect her.

Jaime VandenBerg writes: "I was so excited to come to the Philippines because I was there and loved country and people here, but the experiences I had in the show were not waiting for me, Miss Earth, who feels insecure in their care."

"On the second day I came to the competition, I felt uncomfortable because the donor took my phone number without my permission," Jaime said of harassment. "He called me to request the hotel and the room number, gave the number to the group leader to make this decision, but he did not work, he appeared almost every event I joined and told him he could give me everything to help me go further in this race against sex, disgusting. "

Kosmetist said the sponsor arrived at the hotel to ask for a few candidates for their room number. Jaime was fortunate to be in this hotel, and she decided to stop the weird numbers she played.

Jaime VandenBerg, however, said that he still has to meet the sponsor in other events. "The event Manila Yacht Club, he put my team yacht and some girls took hot pictures. Again, I feel terrible. Then, in another show, he said he could take competitors to Boracay as long as they did not tell anyone. Our group went immediately and felt uncomfortable. He followed us out and was sad because we did not dance together. The group leaders laughed and told us to behave kindly. When it was allowed, we got back on the line, returning back to the boat with him. "

Jaime said that some competitors had trusted the competition person responsible, Lorraine Schuck their anxiety. The organizer announced that the sponsor would no longer appear, but eventually took part in the event. Later, Canadian beauty decided to end the exam but was seized with a passport. "The group leaders are intentionally rummage through my property," Jaime said. With friends to interfere, he returned his passport and returned home, did not complete the competition.

"I am very angry, Group Manager, because if they tell me something like this, deal with it and I will not let it happen," Lorraine told the paper. GMA News.

First-day competitors, the new Miss Earth 2018, Phuong Khanh, said he had never heard of the harassment of competitors in the race and did not even see the sponsors behaving rude. "As a competitor we have been in contact with the sponsor in interest subsidies, but I see things going open." I see Miss Earth's organization and management well. weaken and manage leadership right away, "he said VnExpress.

This is not the first time the Miss Earth competition is stuck in the organization. In the year 2015, Miss Taiwan announced that the organizers did not provide enough food, leading to candidates for money to buy food outdoors. In 2016, the organizers hang the banner welcome to the contestants. In this year's competition, Miss Eartha was also criticized for eating a competitor, drinking water without straw …

Westerners flocked back to Saigon

Where is the weird star who scored 13 goals in the World Cup? – News 24h

Someone agrees who criticizes the destruction of property