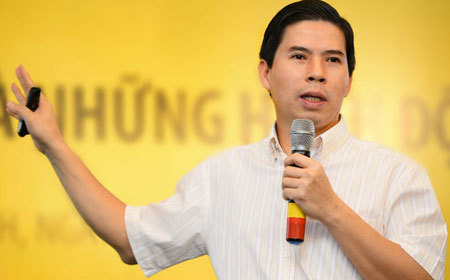 Nam Dinh has continued strong strides to take on the first position in Vietnam for a competitive future.

This is one of Nguyen Duc Tai's (Nam Dinh entrepreneur) steps to expand the size of a company, increasing the capital paid on capital from the unallocated profits of audited accounts in 2017.

This transfer goes hand in hand with chain stores, mobile phones Bluetooth, green department stores, and possibly pharmacy chains when corporate executives turn it over. at the shareholders meeting in 2018.

In the third quarter, Mobile World grew by nearly 20%, Green Machine grew by 80% and the Green Department grew by over 200%. The total number of systems in the system is nearly 2.2 thousand units.

Competition in the expansion of Nguyen Duc Tai's business is a fierce moment in this field of competition, a moment that strengthens the position of head and control in the market.

Nguyen Kim (who has sold shares to Thai giants) has just made a public bid, which is more than 27 percent of Lam Dong Pharmaceutical. This is a business that large companies are promoting in this area.

Competition in the retail market is getting stricter when home bands expanding billions of dollars and tens of thousands to occupy their market share.

Giants also focus on developing e-commerce, including Vingroup and Mobile World. Recently, VNG continues to spend money on Tiki despite having to endure hundreds of billions of losses in e-commerce business in the first half of 2018 … Alibaba used $ 1 billion to buy 51% stake in Lazada in early 2016 and cut billions more into regional market competition.

In the stock market (stock market), the pressure on the profit caused the plunge of many shares. The oil and gas group fell sharply. Real estate stocks remained positive.

Nevertheless, overall market liquidity was low. Money is still lost and affects investors' psychology who intend to stick to the bottom.

Yuanta Vietnam Securities (YSVN) noted that the market may continue to fluctuate with low liquidity in the next few days. Short-term sales pressure is on the rise, so the possibility of overcoming the 935-940 point of the VN index is underestimated, except that the markets will affect the fluctuations in world stock markets. mid-term elections in America.

Bao Viet Securities Co., Ltd. (BVSC) stated that with the SMA20 in a challenging index, investors began to be cautious. However, as the market falls, the market is supported by low demand. Therefore BVSC expects the market to be able to test support 917-921.

Rich Nguyen Duc Tai responded to his market: a dream of billions billion is difficult

Nguyen Duc Tai's business continues to set targets in billions. The competitive pressure of e-commerce, however, makes the strategy change. Mobile World has a competitive advantage in the traditional market.

Murdered his mother, fled the mountain

The archery goddess seemed to make the Olympics “bright.” After an early elimination, he revealed one thing that broke the fans